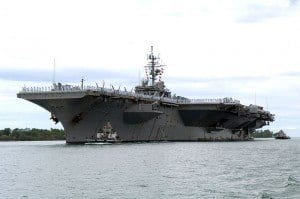 Navy engineers have successfully fired a prototype for the first industry-built electromagnetic rail gun. This is an important stepping stone toward developing a future tactical weapon for ships and brings science fiction to reality.

The high tech gun is capable of shooting rounds 100 miles away at a speed of 5,600 miles per hour. This would allow United States navel ships to extend shell ranges when defending against surfacing enemy vessel, cruise and ballistic missiles fired from the air but would also extend the assault range on ground targets.

The current 5-inch gun equipped on navy vessels has a range of 13 miles. The rail gun would be much more versatile says Roger Ellis, program manager for the rail gun at the Office of Naval Research, “There is potential to replace the 5-inch gun, but it would do far more.”

The rail gun fires projectiles using electricity rather than chemical propellants. The gun is still a prototype but the next phase for the gun is to increase the firing rate, “The next phase of the development effort is to demonstrate the ability to operate at a firing rate of significant military utility,” said Ellis. The Navy ultimately hopes for a rail gun that could fire 10 projectiles at minute at targets up to 100 miles away.

This specific prototype was built by BAE systems but will soon face competition when a second rail gun, built by General Atomics, is set to debut in April. Having two separate companies develop the rail gun allows the Navy a choice, if it in fact decides to deploy this high-tech weapon.