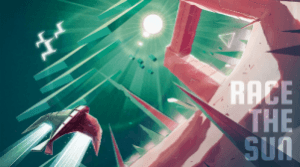 Simple and excrutiatingly hard, Race the Sun is a surprising smatter on the indie game canvas. Developer Flippfly takes a minimalist art style and slaps you in the face with some of the most difficult-but-rewarding gameplay that has graced PC gaming in a long while. While Race the Sun certainly has a layer of depth, it is unlike blockbusters like Call of Duty or World of Warcraft. A social element has been implemented, as well as an unlock and customization system to give players the figurative carrot-on-a-stick feeling as they move to another level. It’s not the customization or the social aspect that works to pull players in, which is the hallmark for some AAA titles. Instead, the extra “fluff” of the game works to enhance a gamplay experience that’s solid even without the extras.

The concept is — as mentioned — simple. You’re flying a solar-powered “craft” through an obstacle course and incredibly high speeds. As the sun sets, your goal is to keep it on the horizon in order to continue your journey; if the sun sets, you start over. If you crash, you start over. Don’t let either happen. Not only are you dashing in between and around obstacles, but collectibles also present themselves and often lie behind mountains or inside of tunnels, adding an element of danger to each of your runs. These collectibles start out as simple score multipliers, but as you increase your own level will evolve into particular effects that can help you stay mobile. Some collectibles will send you forward at increasing speeds, helping put the sun back into the air at the right moment, while others may activate an ability to jump when you take a wrong turn — and you will take a wrong turn.

As you finish each, run you’re granted experience based on how you did, which includes finishing challenges that are issued to you constantly. That is then used to level your ship up to unlock goodies. For instance, early in the game you’re granted a magnet, used to pull in collectibles from a small distance. You were required to be spot-on with your racing lines, but this allows you to miss by a small distance and still obtain the benefit or score multiplier, an invaluable ability for obtaining that high score.

The social aspect is also unique, as it implements asynchronous gameplay to create a relay race, of sorts. One player starts his run and, upon meeting his inevitable doom, passes the torch to the next player. Upon finishing that, hopefully successful, run, the second player passes it to the third and so-on. After four runs, the score is then pitted against other “teams” of players to see who reigns as the champion of the day. It’s only for the day because, quite amazingly, Race the Sun changes the tracks every day in order to prevent players from learning the best possible path and turning it into a simple game of memory.

As simple as it is difficult, Race the Sun combines the elements of constant runner with obstacle course to create a game that’s simple to learn, extremely difficult to master. With constantly changing environments, both during the race and renewed tracks each day, this is a magnificent way to spend 10 minutes or two hours. While the community will eventually be a niche, for those who fall headlong into difficult games and long to learn the nuances, Race the Sun will not disappoint. Even if you’re simply looking for an inexpensive game that will provide basic relief from life, when Race the Sun is finally released, do not skip this title.