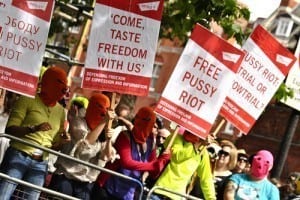 Russian punk band’s sentenced to two years in jail, and the verdict causes controversy around the world

Pussy Riot, the Russian punk band, was sentenced to two years in jail based on charges acquired during their improvised guerilla performance in Moscow’s Cathedral of Christ the Savior in February. The band has been charged with “hooliganism,” according to The Wall Street Journal

The members of Pussy Riot have been behind bars for five months as a result of their protest against the re-election of President Vladimir Putin. The issues that Pussy Riot pressed during their unauthorized protest involved the non-division between Russia’s secular citizens and its religiously-influenced leader, President Putin.

Judge Marina Syrova, who was the judge on the case that has drawn international attention, is on Putin’s political agenda. “The girls’ actions were sacrilegious, blasphemous and broke the church’s rules,” she stated according to Reuters. She also stated in her verdict that Pussy Riot’s performance landed them in jail because of its religious hatred.

Judge Syrova gave a three-hour long verdict to Pussy Riot members Nadezhda Tolokonnikova, Marina Alyokhina and Yekaterina Samutsevich. Although the verdict was no where near being in their favor, the three women reportedly giggled as they listened to the judge’s sentences.

Despite the giggling, the fact remains that the members of Pussy Riot will face their charges, smiling or not. The case against Pussy Riot has gained attention in the rest of the world. The news of Predisent Putin’s harshness on the band has gained sympathy from legendary musicians Paul McCartney and Madonna. The opinion of Russian citizens is mixed, with many showing a lack of sympathy according to Reuters.

Protesters of Pussy Riot’s treatment in a religiously-swayed government showed up in countries such as Spain, France and the United States. The brightest shades of yellow, magenta and tangerine were seen on those who believe in Pussy Riot’s mission in the dresses they don and the balaclavas they present on their heads.