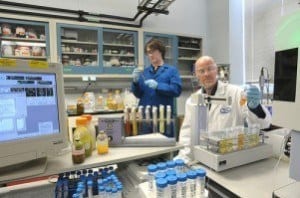 Super-Bug on its Way to USA

Watch out, kids.  The Center for Disease Control and Prevention is warning that Neisseria gonorrhoeae, the bacteria responsible for the sexually transmitted infection, gonorrhea, has become resistant to many antibiotics since the 1930s, according to ABC News.  The bacterium is baffling medical personal, as the disease continues to morph into what they have called multidrug- resistant gonorrhea.
Lab studies have shown that cephalsporins, the current class of antibiotics to treat gonorrhea, have become increasingly ineffective at treating the disease in countries like Japan, France and Spain.  In 2011 two cases in which gonorrhea treatment failed among heterosexual men were reported in Norway, and a new resistant form of the bacteria was found from a female sex worker in Japan, according to the New York Times.
Gonorrhea is the second most common infectious disease in the United States. In 2011, more than 300,000 cases of gonorrhea were reported, according to ABC News.
If this trend continues, the CDC recently warned, the United States could see the emergence of the super-bug.  To help delay its arrival, the CDC has adjusted treatment guidelines for the disease.  They are now recommending that an injectable form of cephalosporin be combined with an oral antibiotic.
Dr. Lindsey Satterwhite, an epidemiologist in the CDC’s Division of STD Prevention, recommends safer sexual practices.  “Wear a condom correctly, think about abstinence, practice monogamy, and get appropriate screening if you’re at high risk,” she told an ABC News reporter.
These preventative measures are especially important for people between the ages 15-24, according to the CDC, because they are responsible for 50 percent of new STIs.  An estimated 20 million people are diagnosed each year in the U.S.; treating these infections costs U.S. healthcare companies nearly $16 billion in direct medical expenditures.
You heard it from the good doctor, folks.  What’s the best way to avoid contracting this dangerous- and quite costly- disease?  Keep the snake in his cage.