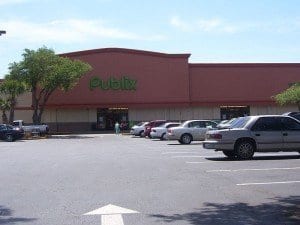 A small experimental plane crashed into the Publix supermarket on Wednsedy in Delan, Florida. The Publix plane crash injured five people and sent shoppers running out of the complex.

Many customers shopping at the time called 911 and the calls were released on Tuesday to the public, “Publix is on fire!” a woman from inside the stored said. “The store is on fire! OK. We got to go.”

Police released a statement about the Publix plane crash, “A twin-engine experiment aircraft has crashed into the roof of the Publix supermarket,” reported DeLand Police Sgt. Chris Estes to The Associated Press by telephone. “Publix is the only structure to suffer any damage.”

Three shoppers inside the store sustained injuries and the only two passengers on the plane were hospitalized in Orlando with severe burns. A report added that a manager in the meat department put out fires on some shoppers clothes and rushed them out of the supermarket.

The plane was amateur-built only seating four people, but only two were present during the crash. The plane did not have a black box but investigators are hoping they will be able to use the GPS system in the plane to learn more about what happened, what went wrong and where the plane was heading.

Most of the plane was ruined in the crash and the worst injuries so far are third degree burns.

See the video below of the chaotic scene of the Publix Supermarket on fire: