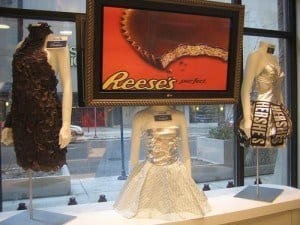 Maybe the people should decide that for themselves

A Project Runway billboard featuring judge and host Heidi Klum and mentor Tim Gunn dressed as queen and king and being worshipped by nude models will not be displayed in Los Angeles.

In today’s world, it’s hard to believe a little bit of butt and side boob will hurt anybody, but the Los Angeles Department of Building and Safety decided that the city has the authority to ban signage that shows “obscene matters.” The sexy photo was originally set to run on billboards, bus shelters, magazines, posters and websites.

One would think that something deemed too scandalous for a city like Los Angeles would be too scandalous for the public eye everywhere, but that’s obviously not the case. While the city of Los Angeles will instead get an alternate version of the Project Runway billboard, featuring scantily dressed models in underwear, other cities, such as New York, will continue to run the original nude photo.

Everyone knows that sex sells, and this ad could be just the sort of publicity the Emmy-nominated reality show is looking for to begin its 12th season. The scandal of the ad, along with the incorporation of more fan interaction during the new season, is also likely to boost its viewership and keep it from following the path of other hit reality shows gone bad (American Idol, anyone?) The billboard incident has done little to impact fans of the show or its stars. Heidi Klum made light of the ad, tweeting, “Designers! We need clothing for these people! Fast!”

The full photo can be viewed on Heidi Klum’s Twitter account, and the only question I have to ask is this: Is this photo too racy for public consumption? And will you be watching the Season 12 premiere of Project Runway on July 18?