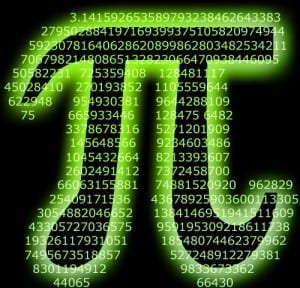 Nerds Celebrate Pi Day with Number Memorization; the Rest of Us Eat Pie

Why celebrate Pi Day today? Well, it’s March 14 (3/14), and the numerical manifestation of the mathematical pi is 3.14159.  Math geeks everywhere celebrate the day with memory competitions and a slice of pie afterward, as a reward for all their hard work.

Yes, believe it or not.  Pi Day is not just some random academic holiday that your math professor forced you to celebrate in high school. Pi is the ratio of a circle’s circumference to its diameter and is represented by the 16th letter of the Greek alphabet.  The number is infinite.

As reported by CNN, Daniel Tammet recited 22,514 digits of pi in 2004, scoring the European record, at the Museum of the History of Science in Oxford.  The recitation took him five hours, nine minutes.  He is promoting France’s first Pi Day celebration at the Palace of Discovery science museum in Paris.

Another super memorizer, Chao Lu, set the current world record for pi recitation at 67,890 digits in 2005.  He was only 23.  According to a 2009 study by Florida State University, he did so by creating associated meanings in numbers by using mnemonics relating to the sounds of numbers and the shapes or meanings of certain digits and numbers.

If you’re not the kind of guy to recite thousands of digits to celebrate Pi Day, fear not.  The Detroit Free Press has thought of a few different ways you might be able to celebrate the day in fun and creative ways.

Think about baking or investing in a whole apple pie.  Have some fun calculating the circumference of the pie by measuring the diameter and then multiplying by pi.  Then, reward yourself with a slice (or many slices) of delicious apple pie!

In another way to celebrate, the Free Press recommends calculating how much money you can save with Pi Day deals, like one at the Microsoft store, which is offering 3.14% off a Dell tablet.