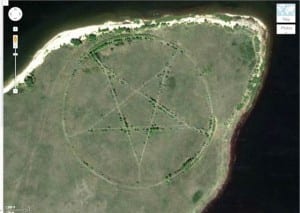 The end is nigh!

The next time you take your daily Google Earth tour of Kazakhstan you will find the curious shape of a five-pointed-star, known as a pentagram. According to NBC News there are no other signs of human habitation in the area, begging the question of where this devilish design came from.

But we know that the pentagram has many different meanings, most famously for Beelzebub AKA Lucifer AKA Morning Star AKA Satan AKA THE DEVIL!

Granted, the pentagram also is a symbol with roots in other religions such as Christianity, Freemasonry and Pythagoreasnism.  That’s right, Pythagoreanism, named after Pythagoras, whom you may remember from your high school math classes. The Pythagorean theory says a2 + b2 = c2.

Well Mr. Pythagoras, I have another theory for you: the transitive property: if a=B and b=c then a=c! Therefore, if the pentagram is a symbol of the devil and there is a pentagram in Kazakhstan, then the devil is in Kazakhstan!

I knew there was something about that Borat movie that smelled funny!

And yes, that’s all I remember from my math classes. Good day.