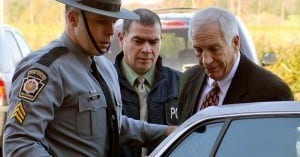 The insurance company wants to remove themselves from the scandal

After recent findings and the removal of Joe Paterno’s statue, Penn State Insurance Company has decided that they will not pay out any claims made from Sandusky’s criminal child abuse.

Victim 2, who has still remained nameless, plans to sue Penn State because of the abuse he was subject to. Victim 2’s attorney released a statement earlier this week stating:

“Our client has to live the rest of his life not only dealing with the effects of Sandusky’s childhood sexual abuse, but also with the knowledge that many powerful adults, including those at the highest levels of Penn State, put their own interests and the interests of a child predator above their legal obligations to protect him.”
Penn State Insurance Company is not the only company removing themselves from the scandal as State Farm recently announced it was pulling ads from the university’s games and will be “reviewing its connection” to the school.