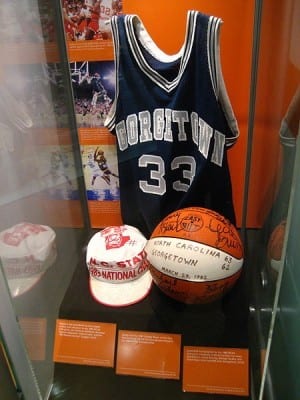 Patrick Ewing will reportedly interview for the vacant Charlotte Bobcats coaching position, according to the Associated Press.

Patrick Ewing will meet with team officials next week, according to anonymous sources familiar with the situation. The identity of the sources is not being revealed as the Bobcats have not officially announced its list of candidates.

Ewing is currently an assistant coach with the Orlando Magic and friend of Bobcats owner and Chicago-legend, Michael Jordan.

Patrick Ewing played for the New York Knicks from 1985 to 2000 and was inducted into the Naismith Basketball Hall of Fame in 2008 on his first-ballot appearance. Ewing also was a member of Georgetown University’s 1982 NCAA championship team.

As an assistant coach with the Orlando Magic, Patrick Ewing has worked extensively with that organization’s own superstar center, Dwight Howard, developing the young talent into the six-time All-Star that perpetually is one of the league’s top rebounders and defenders.

It is possible the coaching search could drag on until June as some candidates may wait to see if the Bobcats receive the number one pick in the upcoming NBA draft.

Having finished the season with a historically woeful record of 7-59, a winning percentage of .106, it is likely whoever takes over the coaching vacancy will have a long, hard struggle before them. Magic coach Stan Van Gundy spoke Wednesday of his faith in Ewing, “He’s ready. And I hope this off-season will be his time.”