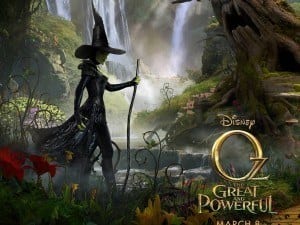 The star studded cast of Oz the Great and Powerful is, in this case, a marker of how wonderful this Disney original actually is.  As someone who trusts neither in the name-caliber of a movie, nor the ability of Disney to actually not ruin a modern childhood favorite of mine, I must admit that Oz the Great and Powerful, along with James Franco, Mila Kunis, Michelle Williams and Zach Braff fully live up to the hype.

The Tin Man, Lion and Scarecrow are replaced by a porcelain “China girl,” flying monkey bellhop and a munchkin herald, through which Oz the Great and Powerful actually manages to create a new generation of what will soon be classic Disney characters.  No doubt, we will see them popping up in Disney stores and McDonald’s toys the world over soon enough.

As for the story itself, Oz the Great and Powerful isn’t just some bland oatmeal and raisins weak offering to the altar of prequels, and certainly does a much better job of getting smiles and interest in the plot than the miserable resuscitation of Alice in Wonderland.  Oz the Great and Powerful is intriguing and even a little adult—parents will certainly appreciate the con-man struggling magician ladies man character of James Franco and the absolutely evil and masterful role of Rachel Weisz as the wicked witch.