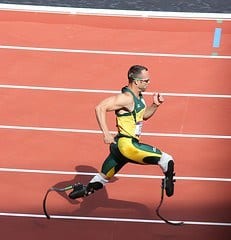 Oscar Pistorious, the double amputee who ran in the 2012 Summer Olympics, was charged on Thursday with the murder of his girlfriend, model Reeva Steenkamp.

Reeva Steenkamp, 30, was found shot to death in Pistorious’ South African home early Thursday. Police reportedly found Pistorious in his home with the dead Steenkamp, and a 9mm pistol was found in the residence. According to police spokesperson Denise Beukes, Pistorious is the only suspect in the murder.

The LA Times is reporting that there has been a string of “domestic incidents” at Pistorious’ home previously, but some media outlets in South Africa are saying the murder was an accident; Steenkamp was allegedly trying to surprise Pistorious for Valentine’s Day when something went wrong. The Olympic star may have mistook his girlfriend for a burglar and shot her to death.

Pistorious was known for keeping weapons in his home to guard against South Africa’s rising crime rate, according to Daily Mail writer Jonathon McEvoy.

“There was the pistol by the bed, the machine gun up against the wall, the baseball bat under the window, a cricket bat too. He was concerned by safety and security to a high level, there was no doubt about that,” said McEvoy, who interviewed the track star at his home in 2011.

Pistorious will appear in court on Friday and authorities say they hope to deny him bail. He was originally scheduled to appear in court on Thursday, but the appearance was delayed to allow forensic investigators more time to gather evidence.

“When a person has been accused of a crime like murder they look at things like testing under the figure nails, taking a blood alcohol sample and all kinds of other test that are done. They are standard medical tests,” Beukes said.

Steenkamp, according to the Chicago Tribune, had been dating Pistorious for about a year. Her latest Twitter postings offered no signs of trouble and she seemed excited for Valentine’s Day; her last tweet read:

“What do you have up your sleeve for your love tomorrow???”