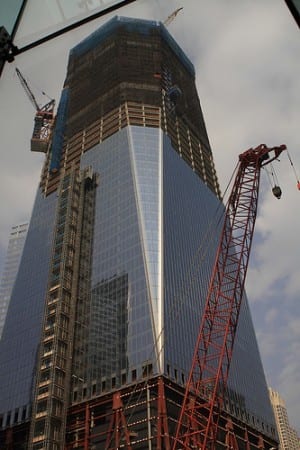 One World Trade Center, built to replace the twin towers that were destroyed in the Sept. 11 attacks ten years ago, will be 1,776 feet tall with 104 floors, giving it 408 feet over the twin towers. However, this number is debated. The Council on Tall Buildings and Urban Habitats, a Chicago-based organization that takes authority on these issues claims, “height is complicated.” There have been disagreements for ages about when measurements for skyscrapers with antennas, spires and masts should stop. Many people think the antennas should count for the buildings, height but others make a solid rebuttal. Take the Empire State Building for example: it stands 1,454 feet from the sidewalk to the tip of its needle. This measurement would put One World Trade Center to shame. The needle, some say, is like furniture since it can be moved and is not a permanent structure on the building. The antenna of the Empire State Building was added about 30 years after its completion, and MSNBC reported, “The record books, as the argument goes, shouldn’t change every time someone installs a new satellite dish.”

So, some people, probably New Yorkers, will want to claim that the new One World Trade Center will be the tallest building in the Western Hemisphere, but without the 408 foot antenna, it will only stand at 1,368 feet, 83 feet shorter than the Willis Tower (formerly the Sears Tower) in Chicago, measured without its antennae.