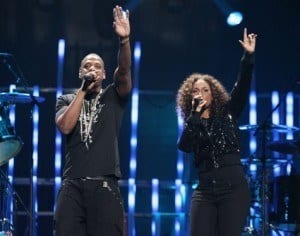 The fourth annual iHeartRadio Music Festival hosted by Ryan Seacrest will feature performances from some of pop music’s biggest stars over the course of two days when it returns to MGM Grand Hotel and Casino in Las Vegas on September 19th and 20th. Such performances will include Taylor Swift, Ed Sheeran, Usher, Coldplay, Ariana Grande, One Direction, Paramore, Nicki Minaj and more that have been confirmed for main stage performances.

Iggy Azalea, Childish Gambino, Magic!, Neon Trees, Kacey Musgraves among others will perform at the daytime iHeartRadio Music Festival Village which will be held in a lot across from the Luxor Hotel and Casino which will also feature “fan zones” that will offer interactive experiences for fans.

The event continues to deliver an incredible music experience for millions of fans each year by allowing them to be a part of the experience by attending, streaming the event live via Yahoo! Screen or tuning in to live broadcasts available on Clear Channel stations in over 150 cities. A two-hour special broadcast of the event will also take place on September 29th, giving the fans the opportunity to watch the event in one sitting in its entirety.

General public tickets for the event will go on sale July 26th at 1 p.m. EST and can be purchased at Ticketmaster.com