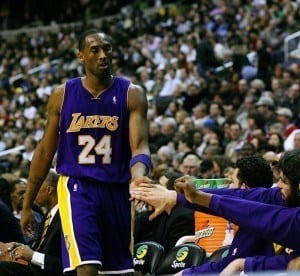 Kobe Bryant’s ankle injury will make the already difficult playoffs that much more strenuous for the LA Lakers.  As reported by USA Today, Bryant severely sprained his ankle Wednesday night in a 96-92 loss to the Atlanta Hawks.

Rising up for a jumper from the right baseline that would have tied the game with three seconds left, Bryant came down on the foot of Dahntay Jones.  X-rays revealed no break, but Bryant told reporters the sprain was one of the worst since the 2000 season and a Lakers official confirmed to USA Today Sports that he will be out indefinitely.

Losing Bryant would be difficult for any team, but the loss will be an especially painful pill for the Lakers to swallow.  Bryant accounted for more than a quarter of the Laker’s offense this season and is responsible for leading the emotional charge that guaranteed a playoff position on Feb. 21, when the Laker’s record was 26-29.  He champions an average of 27.4-points-per-game, which is third in the entire league.

Bryant said after the game that Jones was guilty of a “dangerous” play by sliding underneath his feet as he completed the shot, according to an article on SI.com.  “First and foremost, the officials really need to protect shooters,” Bryant said.  “You just can’t go into shooters.  That’s a dangerous play.”

Jones disagrees.  He says Bryant suffered the injury by landing awkwardly as a result of his kickout leg motion, and that Bryant was actually responsible for the foul by causing the contact.

Either way, the injury could not have come at a worse time for the Lakers.  They are going to make it to the playoffs, but it’s Bryant’s star athletics that got them there.  According to SI.com, replacing Bryant’s offensive production is impossible.

If the Laker’s star player is gone for more than three games, according to SI, look out.  His absence might mean a swift elimination in the playoffs.  Sorry Lakers Fans… get ready to watch every non-Lakers fan from coast-to-coast bask in the pain of your unfortunate-and quite timely- loss.