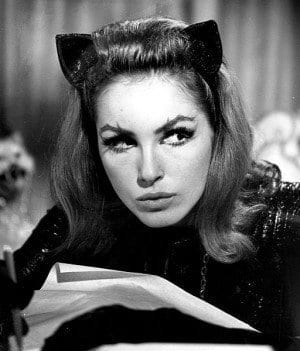 Julie Newmar, 78, the original Catwoman on the televised Batman series in the 1960s who starred alongside Adam West, has expressed dissatisfaction with the direction Christopher Nolan’s latest Dark Knight trilogy has headed.

Julie Newmar, who has admitted to not seeing the latest installment in the trilogy, The Dark Knight Rises, spoke of Nolan’s creations. “It’s dark,” she said. “I think that we had so much fun in the ‘60s – 1966 to 1968. And then Vietnam came and things got darker and darker and darker.”

Newmar added that she was a fan of Michelle Pfeiffer’s portrayal of Catwoman in the 1992 Batman Returns.

Julie Newmar added that, unlike Anne Hathaway, she did not have to go through months of training in order to do the many fight scenes.

Julie Newmar was one of three actresses to portray the Catwoman character on the Batman series. Eartha Kitt passed away in 2008, and Lee Meriwether starred in the role in the series’ 1966 movie debut. Halle Berry took over the role in the 2004 film Catwoman.

Julie Newmar declined to say who her favorite portrayal of the Catwoman character is, but didn’t hesitate to name a favorite Batman – her ‘60s co-star Adam West, attributing his success, in part, to his lack of costuming.

“I think he fit the part better than anyone,” Newmar said of West. “With all the costumes they have to wear now, there’s a lot you can’t see anymore. You know, when you have everything sort of padded out and very macho … it’s as if the costume acts for you.”

Newmar had a hand in designing her own costume for the original series, a costume considered provocative for the time.

“Let’s just say I re-designed it. I put the gold belt around my hips, because it just looked better there,” said Newmar. “The neckline was up to here [points to throat] I didn’t think it was very revealing at all.”

With an astonishing figure measuring, at one point, 38-23-38, it’s no surprise that Julie Newmar wanted to be revealing.

Newmar said playing the role of Catwoman was an honor and, of her place in television history, “It’s nice to be immortal.”

In addition to appearing on the Batman series, Julie Newmar appeared on famed series such as the Twilight Zone, My Living Doll, ChiPs, Fantasy Island and According to Jim. Newmar’s film accolades include appearances in Seven Brides for Seven Brothers, Mackenna’s Gold and Ghosts Can’t Do It.