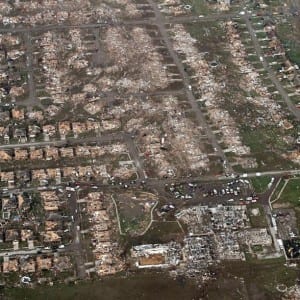 The Oklahoma tornado brings back memories of 199’s deadly tornado

Another Oklahoma tornado turns the lives of Moore, Okla. residents upside down. Monday’s disaster has left 24 dead and hundreds injured.

The Oklahoma tornado touched down at 2:56 p.m. The first warnings gave residents of Newcastle, Okla. and Moore about 16 minutes to prepare. The tornado then tore across 20 miles, reaching a width of two miles at one point. It has preliminarily been classified as an EF4 tornado on the Enhanced Fujita scale, with winds between 166-200 mph.

As of right now, there’s no estimate for the monetary damage done by Oklahoma’s tornado. But it isn’t likely to be more devastating than the number of lives the tornado destroyed.

Originally, as many as 51 people were reported dead. Today that number dropped to 24. Seven of that 24 were children that were killed when the tornado hit Plaza Towers Elementary School. It also hit Briarwood Elementary School and a hospital. Plaza Towers was the most structurally sound building in the area, and all tornado procedures were followed.

“And so people did the right thing,” said U.S. Representative, and resident of Moore, Tom Cole. “But if you’re in front of an F4 or an F5 there is no good thing to do if you’re above ground. It’s just tragic.”

National Guard and the FBI have been deployed to help the recovery operation from the Oklahoma Tornado.

Condolences for the people affected by the Oklahoma tornado have come in from around the globe. Queen Elizabeth II posted on her Twitter, “Our deepest sympathies go out to all those whose lives have been affected, as well as the American people #Oklahoma #tornado.”

Pope Francis urged his followers to pray for those affected. The French president, the German chancellor, and representatives from Pakistan and Spain also released statements expressing their sympathy and commendation for how citizens are dealing with the situation.

“The pictures of this catastrophe render us speechless and can only hint at the scope of the hurt,” said German Chancellor Angela Merkel.