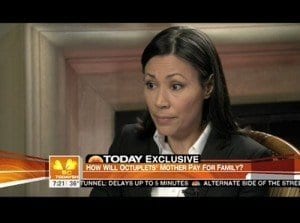 Octomom Nadya Suleman, who came into the spotlight in 2008 for her in vitro birthing of octuplets has finally found a home for her and her 14 children.

The home equipped with five bedrooms, three bathrooms, a three-car garage and a 14,000 sq. foot backyard is located in Palmdale, CA and represents some stability for the mother of 14. At least for the next eight months.

The Octomom, who has come under public scrutiny for being unemployed and relying on public assistance but still going ahead with the in vitro pregnancy that brought about her octuplets, has already paid the first eight months rent for her new home. The welfare Octomom has found a new calling: the adult entertainment industry.

After posing for “Closer,” Suleman accepted a solo role in an adult film, raising questions regarding the impact her decision will have on her children in the future.

As if that was not enough, Suleman accepted a gig working as a stripper at an adult nightclub, a job that allegedly brings the Octomom a six-figure paycheck.

All these sums, plus the $2,000 a month Suleman receives in welfare proved not enough for the mother of 14, as the Octomom went on the website gofundme.com, where she looked for charitable donations to help her scrounge together the $150,000 for a new place.

Now the Octomom is sitting pretty in her new California home as she already put the first eight months rent down in advance. The home costs $2,150 a month.