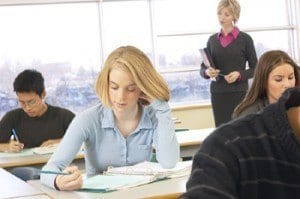 On Monday, the last of 20 students accused of involvement in a college entry exam cheating ring surrendered to authorities, reports the Huffington Post.

18-year-old Michael Pomerantz and another unidentified teenager turned themselves in to Nassau County prosecutors.  Pomerantz is just one of five current or former students in the area being charged with accepting payments ranging from $500 to $3,600 in return for impersonating other students on SAT and ACT exams.  If convicted, they will face up to four years in prison.

Pomerantz was facing felony charges, including scheming to defraud, falsifying business records and criminal impersonation.  Fifteen other students are facing undisclosed misdemeanor charges for having others stand in for them and take the college exams.  Their identities are protected due to them being prosecuted as juveniles.

Great Neck North is where the scandal first surfaced after faculty members looked into rumors that students had paid someone to take the SAT for them.  The school’s principal, Bernard Kaplan, admits that, “it is ridiculously easy to take the test for someone else.”

The Educational Testing Service administers the SAT on behalf of the Princeton, N.J.-based College Board.  They have retained former FBI director Louis Freeh to offer recommendations on enhanced security.

Read more about this case here.