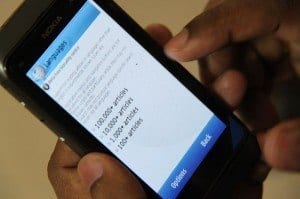 Nokia stock began on a steep slope this morning prompting the phone makers to decide to eliminate 10,000 jobs, or 19 percent of Nokia employment. The removal of these 10,000 jobs will occur by the end of 2013.

The objective of the phone company now is to redeem Nokia stock by saving $2 billion amidst its cuts. According to Wyatt Research, Nokia’s share value fell 15 percent to $2.37 – the steepest Nokia stock drop in 11 years. Nokia stock has undergone the same lack of success for the last four quarters.

Since this morning, Nokia stock has fallen 52 percent, $2.37 now the per-share value. Nokia stock initially began to suffer at the release of Apple’s iPhone in June 2007, leaving Nokia stiff in competition. Struggling to compete with Apple’s iPhone and Google’s Android, Nokia created the Microsoft smartphone, but did not attain the results they expected, and issued a warning that second quarter would bring about greater losses than expected. Losses are predicted to leak into third quarter.

The Nokia stock drop was a reaction to the closing of Nokia offices in Finland, Germany and Canada, along with the executive resignations of Niklas Savander, Mary McDowell and Jerri DeVard. Nokia will also sell its prestigious phone brand, Veritu. More than one-third of Nokia employees reside in Finland, so with closing Finland offices, more than one-third of Nokia staff will be eliminated.

“These planned reductions are a difficult consequence of the intended actions we believe we must take to ensure Nokia’s long-term competitive strength,” Nokia CEO Stephen Elop says, “We do not make plans that may impact our employees lightly, and as a company we will work tirelessly to ensure that those at risk are offered the support, options and advice necessary to find new opportunities.”

“When you make such drastic cuts you have to abandon a lot of things,” Nordea analyst in Helsinki, Sami Sarkamies said. “It may be that they just can’t anymore afford to come up with innovative, new things.”

The company strives to redeem its creative facet and Nokia stock, as innovation is what Nokia prided itself on before falling to its knees. In pairing with Microsoft Corp. in 2011, According to Associated Press, Nokia aimed to do just that, in creating the Lumia phone model. But two-thirds of the employees working on the creation of Lumia reside in Finland.