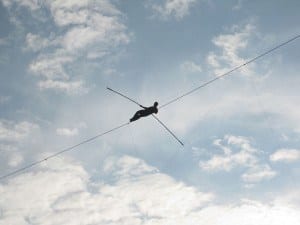 The Niagara Falls tightrope walk is slated to happen tonight with Nik Wallenda, 33, part of the famous Flying Wallends family, but he admits is nervous for this historic attempt.

During a news conference Thursday Wallenda stated of the Niagara Falls tightrope walk, “It’s more anticipation and eagerness, but it’s all coming down to the wire, no pun intended,”

The tightrope that Wallenda will use is only two inches and will be stung across 1,800, sitting 150 feet about Niagara Falls.

Wallenda is set to begin the 45-minute stunt at 10 p.m. EDT. ABC will air the Niagara Falls tightrope walk with a 45 second delay; Billions of viewers internationally are expected to tune in.

ABC stated that for it is to air the walk, then Wallenda must wear a tether to prevent him from plummeting the 150 feet into the raging falls below during a primetime event.

The station’s Senior Vice President for Content Development James Goldston said, “We just wanted it to be an exciting, family-friendly occasion.” He did not that Wallenda wasn’t please with the decision.

“I’m wearing a tether because they’re making me wear a tether,” stated Wallenda during a Canadian press conference Wednesday.

Karl Wallenda, Nik’s great-grandfather, whom fell to his death in 1978 during a tightrope act in Puerto Rico, claimed that walking with safety gear did nothing to ease fear before a stunting, adding that it actually made him more nervous.

There has been a ban on attempting a Niagara Falls tightrope walk, but Wallenda petitioned both the U.S. and Canada for two years in hopes of the stunt coming to fruition.