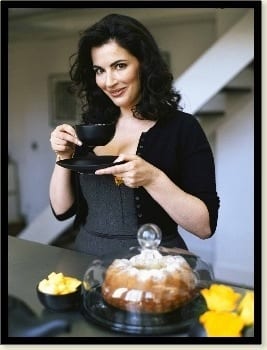 Nigella Lawson, celebrity chef and internationally-known domestic goddess, was involved in a terrifying and embarrassing domestic dispute in public. Nigella Lawson and her husband, über-wealthy art collector and advertising executive, Charles Saatchi were dining on the patio of his favorite restaurant when a dispute broke out. Customers and passersby witnessed Saatchi grabbing and choking Nigella Lawson.

Despite the fact that Nigella Lawson was being physically assaulted, no one intervened or called for help (just another sign that humanity is doomed) but instead took pictures of the incident and sold them to a British publication. Charles Saatchi then left the restaurant and waited in the car while Nigella Lawson sat crying at the table, attempting to compose herself before rejoining him outside.

Nigella Lawson had a varied career in journalism before catapulting to fame with the release of her best-selling cookbook “How to Eat” and her television show “Nigella Bites.” Nigella Lawson struck a chord with millions of viewers with her zest for life, love of wine and her completely casual approach to cooking and writing. She was married to journalist John Diamond before his untimely death due to throat cancer. She married Charles Saatchi in 2003.

This is not the first time Charles Saatchi has been caught displaying less-than-stellar communication skills, as previous photos have shown him covering Nigella Lawson’s mouth with his hand. Despite the seemingly abusive relationship, Saatchi denies any wrongdoing, stating, “About a week ago, we were sitting outside a restaurant having an intense debate about the children, and I held Nigella’s neck repeatedly while attempting to emphasize my point.” Saatchi also claims that Nigella Lawson cried not because of his violent actions, but because she hates fighting with her husband.

Whatever the truth of the matter may be, Scotland Yard is now investigating the incident.