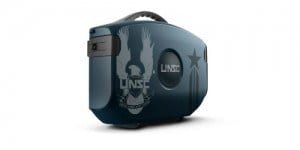 Gaming has evolved into two different, but interesting, flavors: home and mobile. With the mobile market booming thanks to smartphones and tablets dominating the market, a common complaint from hardcore gamers is that the games they love aren’t available during travel. Because tablets and smartphones don’t yet hold the same amount of power that your favorite console has, people are often limited to the types of games they can play. Granted, there are some amazing games available on mobile devices, but nothing quite on the scale of your favorite console games. There is one device though, that helps combat the agonizing trips you’re forced to take; when visiting distance relatives, holidays at the in-laws, or even on spring break, GAEMS UNSC Vanguard allows you to bring your own gaming environment with you, wherever you are. With a pricetag of $349.99 the question is, “is this really worth the cost?”

Packed full of impressive hardware, but still designed to allow for mobility, the GAEMS UNSC Vanguard dons the UNSC logo and colors familiar to Halo fans around the world. The shell itself is made from a hard plastic, designed to protect the hardware inside from most impacts, though more major collisions are sure to cause damage to the console, the screen, or both. Fear of the device opening and your contents spilling onto the ground are unfounded, as there are two heavy-duty plastic latches that hold the clamshell design together, each of them with tabs to attach a lock for added security.

And while the design and protection is surely important, it’s the hardware itself that folks will take note of. The most noticeable feature is the 19” LED HD display that is expertly attached to the top shell as you open the Vanguard. The increase of nearly 4” over the earlier model, the G155, adds to the overall experience. Granted, players typically spend their time on something much larger, but portability is a top priority in this design. Not that an explanation is needed, because the quality of video that beams from the display is magical. Sure, that’s a sensationalized description of a high-end monitor, but it’s well earned. The included UNSC-branded remote allows easy access to modifying your screen brightness and volume controls, but is small and those who are absent-minded may lose it easily. Controls are available on the monitor itself though, and the implemented LED lights match the overall motif, monitor backlights and all.

The speakers, integrated into the monitor, provide a clear stereo sound and despite their relatively small size, they’re powerful enough to call the attention of people in your area … who will kindly ask you to turn it down. Fear not though, because players who want to keep the audio to themselves or simply don’t want to deal with anybody around them will find solace in two 3.5mm headphone jacks, useful when you’re playing with a friend. Be cognizant of how you insert your headphones though, in testing the connection seemed touchy, resulting in poor connection and poor audio quality. Simply turning or wiggling the input fixed the issue, though it’s still noteworthy.

The setup is easy too, requiring users to simply seat their console in the device and strap it in using the mesh straps to ensure the console doesn’t move. Typically the UNSC Vanguard comes with a foam mat to place the console on, providing added traction, but was absent from the review unit provided to College News. This is notable because without the foam mat, positioning the console was tricky, as the straps cover the heat vent on top of the Xbox 360 Slim model and result in overheating and console freezing when not properly installed.

Upon securing your console, which can fit a Playstation 3 Slim, but may draw questions in a Halo branded device, it’s simply a matter of attaching the cables before you’re ready to play your favorite game! The HDMI cable provided is short enough that it stays out of the way of the power brick for your console and the AC adaptor for the UNSC Vanguard itself. It may seem that these cables would be a hassle to haul around with you, but provided are two storage pouches that have enough space for the power bricks and cables, plus a little additional storage for one controller. Again, the design focuses on portability and limiting weight, but storage capacity for at least two controllers is ideal. A unified power source, where the Xbox plugs directly into the GAEMS unit itself might be the easiest way to free up space without having to increase the overall bulk.

There are two primary questions all gamers have with hardware like this. First, is it worth the $349.99 retail price? Second, will I use it often enough to justify spending the money? The simplest answer to both is a resounding “Yes!” The price is steep, but any hardcore gamer will find multiple uses for the GAEMS UNSC Vanguard.If you’re simply in need of another monitor due to sharing your primary one with a roommate or significant other, the quality provided and the easy access will justify the purchase. If another monitor isn’t an issue, but you’re a gamer and long for your favorite game while on your trips away, regardless of distance, this makes it easier to bring your loved one along; the console, that is.

You can visit GAEMS at: http://www.gaemspge.com to see their other options for personal gaming environments.