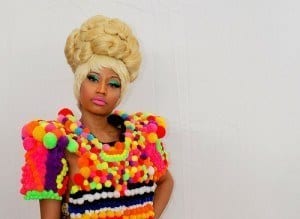 Nicki Minaj has always pushed the limits in her image and in her music ,and the Grammys, indeed, were full of surprises.  But, Nicki Minaj’s performance this Sunday, on and off the stage, went beyond the realm of surprise and crossed over into creepy and confusing territory.

Nicki Minaj walked the red carpet in an equally red satin robe that was custom-made by Atelier Versace.  The robe looked like an haute-couture adaptation of a robe worn by cardinals, embellished with black beads around the hood and the front of the robe was decorated, in the same beading, with Versace’s Medusa logo.  The boundaries of Nicki Minaj’s outfit didn’t stop at the robe, as she was accompanied by an older Caucasian man dressed as the pope.  Nicki Minaj is pictured with an expressionless face while clung to his arm in almost every shot.  She was apparently channeling her alter ego “Roman Zolanski.”

Nicki Minaj took this alter ego on stage with her as she debuted a song from her new album, “Roman Reloaded,” and her performance took, as Fox News stated, “religious symbolism to a whole new level of weirdness.”  The performance began with a pre-taped skit where Minaj is applying pink lipstick, while singing, “I Feel Pretty” to show her level of insanity. As a priest walks in, she hisses and runs up the wall and speaks to him from the corner of the ceiling.  The onstage performance starts with Minaj’s hands tied-up above her head with backup dancers surrounding the rest of the stage.  In between verses, Nicki Minaj groans, mumbles and yells things like, “Stop it please, get out of my head!”  The performance ends in what seems to be an exorcism of sorts, complete with levitation as she ends the song floating in the air.

Of course, Nicki Minaj’s performance has enraged the Catholic community.  According to the Washington Post, Bill Donohue of the Catholic League made a statement:

“None of this was by accident, and all of it was approved by The Recording Academy, which put on the Grammys. Whether [Nicki] Minaj is possessed is surely an open question, but what is not in doubt is the irresponsibility of the Recording Academy. Never would they allow an artist to insult Judaism or Islam. It’s bad enough that Catholics have to fight for their rights vis-à-vis a hostile administration in Washington without also having to fend off attacks in the entertainment industry.”

There are speculations all over as to whether Nicki Minaj was, in fact, poking fun at Catholicism or if it is simply a persona to gain publicity for her latest album.