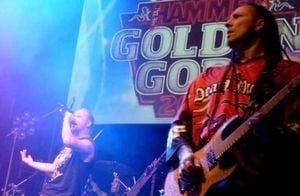 As you’re swimming through ideas of Halloween costumes, what candy to buy and whose house to TP, check out some of the stuff below to get you going. You might find to perfect soundtrack after you leave a bag of crap on your neighbor’s door, set the bag on fire and ring the doorbell. Cheers!

I figure I’ll start the list off with some in-your-face rock. We have Five Finger Death Punch who, after two albums, has cemented themselves as a band that have some legs and can take their career into the next decade if they play it right. With tracks like “Back for More” and “Under And Over It,” these guys have blend the clean vocals of mainstream metal and yet still have a bit of grit in their songs.

Ok, this is Bjork we’re talking about. You either think she’s a freaking genius or you think of her as that weird looking chick that wore a swan as a dress years ago. You probably made up your mind whether you’ll get her new album or not, did you? Well, all I can say is…it’s Bjork. With ever album she somehow find ways to mess with your concept of how music should be experience. Yes, experience, not just listen. With ”Biophilia,” there will be apps for each song available for the iPad.

Mayer Hawthorne – ”How Do You Do” [Republic]

I remember hearing one of Hawthorne’s tracks a couple of years. After a quick listen, I thought this was from the ‘60s. I mean, with all these cats out trying to emulate the sounds of Motown and Stax records, Mayer Hawthorne has got it down pat: the intstrumentation, the lyrics, the vocal arrangements. He really nailed it. He didn’t just listen to those old records, he devoured them and it became part of his soul. Check out the single “Get To Know You.”

Straight out the West Coast, MURS is only one of a handful of rappers whose songs are don’t revolve around guns and bitches. With MURS, you’ll get songs about heartbreak, being on the road, being an independent rapper, selling candy bars as a kid and also the little mundane things that folks go through every day. ”Love And Rockets” doesn’t stray from that path, but if it ain’t broke, don’t fix it, right? Dig his track “Remember 2 Forget.”