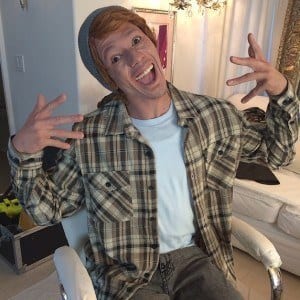 Is wearing whiteface the same as blackface?

Nick Cannon has broken the internet by posting a photo of himself in whiteface to support his new album. The album is titled “White People Party Music” and is due out April 1.

The photo was posted on Nick Cannon’s Instagram account and immediately caused quite the uproar. Cannon appears with white makeup, blond hair and goes by the name Connor Smallnut.

Portrayals in blackface are usually met with harsh criticism, as are white actors portraying Native Americans. Is Nick Cannon’s whiteface picture the same thing? Some seem to think so.

The internet has surged with comments on the insensitivity and un-funniness of Cannon’s whiteface. Nick Cannon defended himself on Twitter by saying, “It’s funny how people take themselves so seriously. People love drama! We feed off of it. Just relax and have fun!!”

Some critics have called Cannon’s move as “racist”, “ignorant” and “hypocritical.” Cannon might not be helping his case by naming his album “White People Party Music” and by hashtagging his photo with clichés of white culture including; #goodcredit #dogkissing #beerpong #farmersmarket #creamcheeseeating and #racialdraft.

What’s your opinion? Racist or just for laughs?