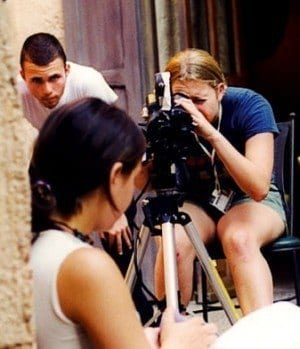 **This content is sponosred by the New York Film Academy**

The New York Film Academy is well known for its impressive alumni. Success stories from graduates continue to make the headlines – very recently, Vibish Sivakumar shot to global stardom as the titular character in Ang Lee’s movie adaptation of Life of Pi. Sivakumar has spoken highly of his time at the New York Film Academy, which helped him prepare for his daunting role.

While the New York Film Academy is committed to preparing its current students for a successful career in entertainment industry, it is equally keen to help the next generation of actors, writers and animators get off on the right foot.

As always, the New York Film Academy takes pride in diversity and the camp’s sixteen-year history has seen students from all walks of life take part. Catering to numerous interests, the camps are tailored to two age brackets: high school (14-17) and tweens (10-13).

For many students, their time at the summer camp is the first big milestone on the way to a life in film; notable young attendees from past years include Nicholas McDonald (who went on to a reoccurring role in ABC’s The Middle) and Analeigh Tipton (of Green Hornet and Warm Bodies fame). In 2005, Eve Hewson – actress and daughter of U2’s Bono – joined the summer acting camp to kickstart her now budding career.

The camps are an enjoyable, fun experience. Students will get to work closely together during the program and socialize during down time, all within a relaxed environment.

Although no prior experience is necessary, attendees should be prepared to see an entire project through to completion during the camp using state of the art technology. Following an orienteering session on campus, students at the New York Film Academy summer camp will be launched straight into a series of class tutorials before using their gained knowledge in practical, hands-on sessions, which will get them started in their craft of choice.

There is a range of camps available. For those who fall into the high school age bracket, these include:

Staff and counselors won’t hinder students from getting the most out of their experience (which involves exploring locations outside of campus), but at the same time parents needn’t worry about adequate monitoring and supervision. Staff will happily work with parents ahead of time to ensure any specific requirements are accommodated for.

Not in New York? No problem!

The teen camps benefit from New York Film Academy’s international reach by offering a range of programs (between one and six weeks in length) across its global network of campuses.

National Film School in Paris – Paris is the jewel in the crown of cinema history, and today the city is to Europe as New York is to the US.

Harvard University campus, Cambridge – Although Harvard is a relatively new location in the summer camp lineup, it’s certainly a noteworthy addition. Harvard is one of the world’s most famous Universities and is situated in a great environment for filmmaking.

The Gold Coast, Australia – The New York Film Academy campus in Australia is situated between idyllic Byron Bay and the urban center of Brisbane. A superb location for not only filming but also for exploring the best of Australian culture – many extra-curricular excursions are available during the program, all supervised by Academy staff.

Universal Studios, Los Angeles – In the world of filmmaking, Universal Studios is a name, which needs no introduction. Having access to Universal’s back lot is a boon to any student attending the summer camp in LA.

Disney Studios, Florida – As with the expansive facilities at Universal, having access to the fully dressed sets at Disney Studios (and EPCOT) is a dream come true for young filmmakers.

Florence, Italy – By special invitation of the Tuscan government, New York Film Academy is honored to host a summer camp in Florence, one of the world’s most beautiful ancient cities.

Heading to a Camp This Summer? Some Tips for Attendees (and their Parents)

– Many of the summer camp programs have food included in the price (see below), but in instances where food is provided on a half-board basis, additional meals should be budgeted for. As this will depend on the location and type of camp, a member of The Academy will be able to advise ahead of time.

– Since the programs waste no time in getting students into the action, it’s beneficial (though not compulsory) for students to have some kind of rough idea as to what they want to achieve and create before arriving.

– If traveling out of town to attend the camp, take the opportunity to plan some activities and things to see while on downtime. All of the New York Film Academy’s camp locations are worth of exploration!