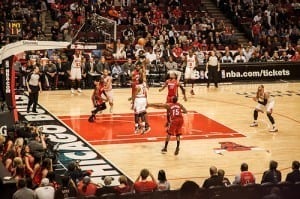 The NBA is back in full force and began with one of the year’s most anticipated games in the 2013-14 season. In a rivalry deeper than Gryffindor and Slytherin’s, the Miami Heat and the Chicago Bulls came to the court to battle it out, with the Heat escaping the first battle with the win. The Miami Heat were still enveloped in their Championship title from last season with the team receiving their shiny new rings in a ceremony before the game.

“You never know what to expect when you are trying to keep the main thing the main thing, and that’s the game,” said the Heat’s coach, Erik Spoelstra. “But you can’t deny the emotions and what a special moment it was for everybody in the organization because we know how difficult it was and how harrowing that was last season. So it was great to actually get the win after that to cap off a very good night for the Miami Heat.”

The Heat couldn’t bask in the glory too long because it was game time and also the highly anticipated return of the incomparable Derrick Rose, who was out the duration of the end of last season due to a knee injury he attained back in April of 2012. Unfortunately, while his return was supposed to be accompanied with major fireworks, it barely made a bang. He ended the game with a 4 for 15 and completed a total of five turnovers, while racking up 12 points.

Rose explained his disappointment after the 107-95 loss the Bulls suffered during the 2013-14 season debut. “I am disappointed with the loss. My performance, I can easily change that by making shots and limiting my turnovers,” said Rose. “The second quarter really caught up to us.”

The real star on the Bulls’ side was Carlos Boozer who gained a total of 31 points during the game. The Heat’s superstar Lebron James, ended the game scoring a total of 17 points and completed eight assists and seven rebounds. Chris Bosh came away scoring 16 points for Miami, while Dwayne Wayde followed close behind with his numbers coming in at 14.

At half-time, the score was in Miami’s favor at 54-33. The Bulls put in an effort during the second half, but Miami ultimately cinched the game at end.