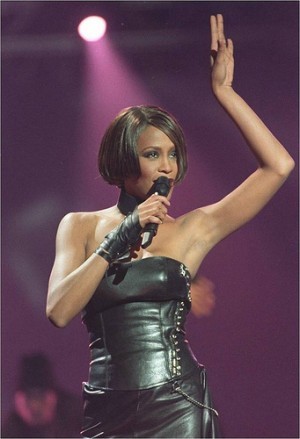 Is it too soon?

The National Enquirer, that one tabloid seen in every grocery aisle, is no stranger to bashing Whitney Houston. They did a spread of the troubled singer about her final moments alive and hired an actress to pose as Whitney Houston’s dead body.

Now, it seems the National Enquirer got what their wish. In their latest print, the words “Whitney: THE LAST PHOTO” are stamped on the front cover accompanied by a picture alleged to be Whitney Houston dead in her coffin.

The photo was apparently taken inside the Whigham Funeral Home in Newark, New Jersey and shows the R&B superstar, lying in her gold casket with her childhood nickname: “Nippy,” embroidered above her head on the casket’s silk lining.

Whitney Houston is pictured in her “favorite purple dress,” says the Enquirer cover, “Buried in jewelry worth $500,000” and “had gold slippers on her feet.” Controversy has erupted throughout the media questioning the legitimacy of the photo and the integrity of the tabloid.

The Houston family had gone to extensive lengths to keep the media in check during Whitney’s wake and funeral, but this picture seems to have been taken at a private showing, bringing many to question who took it and how much did they get for it.

These types of actions are not uncommon for the Enquirer, which has been called “distasteful” and “too soon” on Twitter and Facebook. The tabloid, in the past, published a picture of Elvis in his casket in 77’ and followed suit with John Lennon in 88’.

Whitney Houston’s bodyguard found her unconscious in the bathtub of her Beverly Hilton Hotel room in California on Feb. 11. She was laid to rest last Saturday in her hometown of Newark. She was 48-years-old.