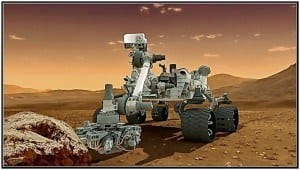 The Mars Rover, dubbed Curiosity, is living up to its name on the red planet.  Apparently, the only thing curiosity is curious about is dick.  Yup, that’s right.  I said it.  Curiosity wants dick.  Haha.

If there wasn’t any context for that last sentence, you might think Curiosity is the name of some inner-city prostitute.  But nope, Curiosity is the multi-million dollar rover NASA planted on Mars last year to explore the sandy red planet in search of signs there might have once been life.

And it must be getting lonely up there because a couple nerds noticed on NASA’s website a picture of Curiosity drawing a penis on the red planet’s surface.  Sure, this photo could be photoshopped, according to geekosystem.com, but it was found on the official NASA webpage.

And after being shared more than 40,000 times in a matter of just a few hours on Reddit’s r/funny subreddit page Tuesday, NASA’s website actually crashed from all the additional traffic.  Curiosity is controlled by a team of NASA engineers, who send the rover a set of two instructions each day, according to Space.com.

Some of the tracks made by Curiosity’s six wheels can be seen from space and were documented by the HiRise camera of NASA’s Mars Reconnaissance Orbiter in January.

The photo, which can be easily found on the internet, is swiftly becoming one of the most popular things on the internet.  So, what do you think?  Did Rover, or engineers at NASA, intend to draw that dick in the sand.  Or was it all just one big mistake?