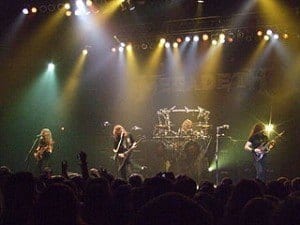 I hope your Halloween was a good and fun one. I hope all the ladies got their skimpy costumes, getting their sexy on. I hope all the fellows fulfilled their fantasies of being more muscular and badass than they are. But hey, that’s what Halloween is for: to be something we’ve always wanted to be. So with Thanksgiving coming up, here’s some new shit for you to check out.

Let’s start off with a new one from on the “Big Four”. If you don’t know what I mean when I say “Big Four” then kindly search it on Google because I don’t have the time to explain. Anyway, here you have another collection of new cuts from Dave Mustaine and company. After thirteen albums – get it? That’s why they call it “TH1RT3EN” – fans can expect the guitars, drums, and vocals to maintain and exceed the typical amount of extreme face meltage.

Yep, that’s right. That’s not a bad acid trip you’re having, you’ve read that correct. Lou Reed, the progenitor of melancholic musings, has collaborated with one of the most popular metal bands in the world. It’s a match made in…somewhere! And to top it off, the album was inspired by the plays “Earth Spirit” and “Pandora’s Box” written by German expressionist Frank Wedekind. Listening to this will be an experience, I’ll tell you that much. But listen for yourself.

Now here’s something for all the video game nerds: music selections from your favorite video games getting the full blown orchestral treatment. Yes, it has finally happen. The London Philharmonic Orchestra took the music from the likes of “Final Fantasy”, “Call of Duty”, and “Tetris” and give it the depth and nuance that only an orchestra can bring. Too bad they didn’t do Aeris’s death scene in “Final Fantasy VII”, but it’s cool. But they do have the main theme from the series.

Chances are that you were rolling your eyes when you saw the title. “Who does this dude think he is?” you say to yourself. But among all the rappers that call their music classic and turn out to be the complete opposite, there are the few who are able to back up such grandiose claims. Metaphor, frequent collaborator with Madlib and MF Doom, is putting out his sophomore release, with Madlib providing beats for the majority of the tracks. To sweeten the deal, the title track features Talib Kweli on the mic. Not bad.