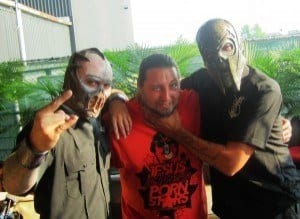 Back when Mushroomhead came out they had heard all of the comparisons to Slipknot; even though they hit the scene first.  If there was any comparison to make with Mushroomhead it would be more like an homage to Halloween and the earlier practitioners of this kind of stage show like Kiss, Alice Cooper, Gwar; or how about the newer bands like Hollywood Undead, deadmau5, or even Blue Man Group.  The point is that this kind of stage show is alive and well and shouldn’t be treated as something that is mimicked in any kind of way.  It is just a stage show that is fun.

I got to sit backstage with Waylon Reavis and Jason Popson and as cliché as it sounds; we got behind the masks.  No, I don’t like that, we went beyond the masks.  That’s the same thing; maybe, inside their pants?  NO!!!  That’s mortifying for both parties!  Whatever, we talked backstage about life, Slipknot and all things Mushroomhead.

Waylon Reavis:  For your 5 year old, no we don’t eat people.

Jason Popson:  We eat pizza like little boys do.

WR:  Here is the truth of it.  Everyday is Halloween to us, except we don’t get candy.  It is all in fun for the show.  We don’t eat people, even though sometimes I want to, but I resist.  Nothing malicious, we just like Halloween too much.

KW:  Should you all start that, where the crowd throws you all candy on stage?

WR:  We like anything gummy, get some Sour Patch Kids, Sprees; just bring those.

JP:  You could throw some cotton candy all day long, really just anything soft.

KW:  Mushroomhead is on the 8th studio album…

KW:  That’s what you got on the website.  (laughs)  It is called “The Righteous and the Butterfly,” you named the album in honor of your original guitarist J.J. Righteous and Vanessa Solowiow?

JP:  They were integral to the band.  J.J. wrote a lot of material.  Vanessa, she was our photographer as well as the wife of our drummer and they have two boys, 15 and 13.  Unfortunately we lost them way too soon.  So, that was a big rallying point to make this record.  We weren’t just making another record; we were building a tribute to our fallen loved ones.  That’s why there is so much heart in it.

KW:  Did you read ahead on my notes?

KW:  (laughs) It is a bit of chicken scratch isn’t it?  I was going to ask if there was a different mindset to writing this album.

JP:  Aside from building a tribute to those two wonderful people, it was about getting back to the core of the band.  Kind of a reflection of the bands’ entire 20 year career and let’s cherry pick all of the best parts of this band and put it on a record.

KW:  What do you think the core of Mushroomhead is?

JP:  I think the core is passion, heart and creativity.

KW:  (finger snapping) You there Waylon?

WR:  I was actually thinking about Legos.  (laughs) You can’t really answer that question any better than Jay did.  It is about heart and really wanting to be here.  That is the key; we ALL WANT TO BE HERE!  It ain’t a job.  I’m not looking over on the stage going, “I can’t wait to get away from your ass!”  I’m looking over like, “let’s tear this motherfucker apart!

JP:  It is a strange combination between a choice and a calling.  Obviously, we choose to be here, but at the same time there is an internal need to be here.  Life would be easier if we didn’t have to do this, but it is inside us.  Whether you have to make sacrifices, like he said earlier, he is away from his little boy on his 6th birthday.  This is what is inside him and all of us!  Throughout the years I think we weeded out the others and now everyone that is here has that same drive inside them.

WR:  I love what I do and if I didn’t do this I would go crazy!  Like Jay said earlier, I’m going to quote you Jay, “A lot of probation officers lost their jobs because we are in this band.”

KW:  This was kind of funny when I came across this.  I laughed when I saw it.  What was it like meeting and being onstage with Gary Busey?

WR:  Oh my God, it was awesome!  The Buse came onto the bus afterwards.  We had Gary and Jake with Gary playing the water drums.  Busey was smoking a cigar…OK, first things first, you DO NOT SMOKE ON THE BUS!  Second, we all looked and went, “it is Gary Busey, he can do what the fuck he wants man!” He was just smoking, that was the fucking shit!  (laughs)

Gary Busey was an awesome human!  He was very nice, very down to Earth.  I had my family out at the time and he was more interested in the fact that I had my little boy on the side of the stage and everytime I wasn’t singing I was paying attention to my kid instead of the thousands of people that were out there; he was more interested in that than he was anything.  Gary Busey left a very GREAT impression on me and the fact that he could smoke on my bus (laughs).  He could put it out in the couch for all I care.  (laughs)

KW:  I know you guys are kind of comic nerds.  Here is an epic battle scenario; who would win in a Thunderdome kind of death match, Gary Busey, Nicholas Cage or Spike Lee?

KW:  How would it play out?  Give me your best play by play prediction.

WR:  Busey walks in, Busey smiles, they melt and DONE!

JP:  I don’t know though, Cage is one freaky fucker though.

WR:  Once Busey’s teeth come out though, it is done!  He smiles, smokes his cigar and it is done.

JP:  Spike Lee will just blame it on the man.

KW:  Over the years, I know you’ve heard this before; I’m sure you know what is coming.

KW:  Yeah, it is the constant comparison to Slipknot.  Let’s put an end to this idea right here.

WR:  David Bowie, or what’s his name from Genesis, umm, Peter Gabriel!  This is nothing new.

JP:  This stuff goes back to the Kabuki performers thousands of years ago.  It really comes down to the press you know?  It is just really easy to put a stigma on you and talk shit to get attention.  The cool thing was that we got to meet Paul before he passed and he was a real sweetheart of a guy.

Skinny and I have worked with Sid from Slipknot and Corey came out recently saying he’d like to do a tour with the bands that came up doing this sort of thing.  I think that thing has finally been put to rest.  Both bands have proven their own merit and musically we’re very different.  There is no reason you have to choose between one or the other.  It is all theater; whatever is going to entertain you, just embrace it!

KW:  What does the future hold for Mushroomhead?

JP:  Other than that, we are going to be out in October on a co-headlining tour which we can’t talk too much about right now.  Other than that we have 5 or 6 songs leftover from the album, so we are putting out an EP hopefully around the first of the year.  More new music and more touring and hopefully talking to more cool people like you.

WR:  Remember, the future is tomorrow.