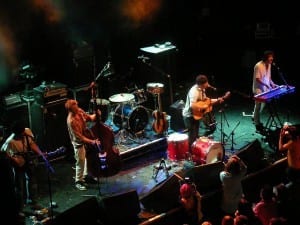 “Hopeless Wanderer” shows off the groups silly side

Mumford & Sons released the music video for “Hopeless Wanderer” on Sunday. If you haven’t seen it, you need to check it out.

Mumford & Sons have gotten a jump on the normal life cycle of a music video. First, the band releases the video. Then someone parodies it. And finally, so many parodies appear that people get bored and move on to the next music video.

The “Hopeless Wander” skipped the initial music video and went straight to the parody. Mumford & Sons gets replaced by some of comedy’s top stars: Ed Helms, Jason Bateman, Jason Sudeikis and Will Forte.

In the beginning, the group actually tries to do justice to the incredible talent that Mumford & Sons is. But as the video goes on, it’s clear that these men are not musicians.

The opening shots look like a normal music video. Hazy fields of golden light. Glare obscured faces. A ridiculous amount of “artistic” touches. A clear folk genre video. The one minute mark is where Mumford & Sons differentiates themselves from the other popular folk bands of today.

The next minute or so progresses normally with Helms on piano, Bateman on banjo, Forte on bass and Sudeikis as lead singer, Marcus Mumford (if you ignore the minor homoerotic glances that pass between the comedians). But then Mumford & Sons take full advantage of these comedians’ talents.

The rest of the video is full of comedic antics. The men share tears, kisses, a tiny boat, and drinks. They round off the video with the required smashing of the instruments.

Mumford & Sons have brought us a music video to remember. And they are definitely a band to keep your eye on. They ought to have great things to come.