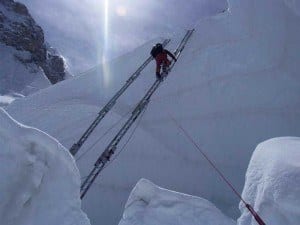 As conditions cleared at Mt Everest’s summit this weekend, climbers raced to fulfill their dreams of making it to the peak

Mt. Everest claimed the lives of four climbers this weekend, and one more is missing after 150 climbers attempted to reach the summit of the world’s tallest peak.

It was the first stretch of clear weather during the spring climbing season, and climbers took advantage of the opportunity to hit the trails leading to the 29,029-foot peak of Mt. Everest.

Climbers crowded the trails, resulting in a “traffic jam.” As the weather cleared toward the summit of Mt. Everest, groups of climbers began moving toward the trails all at once. Climbers must turn back after a few hours, given that the window to reach the peak is a small one.

This weekend, climbers ran into a traffic jam. One Nepali mountaineering official reported that climbers were heading to the summit at 2:30 p.m., even though 11 a.m. is the latest start time recommended. Nepalese authorities acknowledged safety concerns but said they can’t turn any of the climbers away as they have received permits to climb within specific dates.

Today, climbers reported discovering another body, that of Chinese climber Ha Wenyi, who had gone missing on Saturday.

The four climbers apparently died from exhaustion and altitude sickness, most likely a result of the traffic jam.

A Chinese national is still missing, but another missing man, a Nepalese Sherpa guide, returned safely to base camp Monday.

While Mt. Everest became the final challenge for several climbers Saturday, it was also the site of a record being broken. Tamae Watanbe, 73, became the oldest woman to scale the peak of Mt. Everest on Saturday. She broke her own record that she set a decade ago when she reached the summit at age 63.