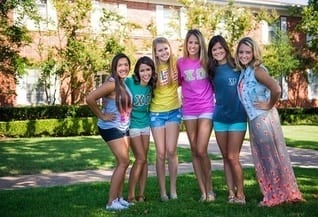 Should I join a Greek organization on-campus? This is a question many college students ask themselves. Today, nine million students from over 800 college campuses across the country have answered yes to this question and are members of Greek sororities and fraternities according to national Greek statistics. Belonging to Greek organizations is a fun and rewarding experience for students as they make their way through college. Even after college, people identify with their Greek affiliations, and Greek organizations, in turn, are proud of their outstanding alumni. Many well-known, successful individuals come from Greek backgrounds; in fact, all but two U.S. presidents since 1825 have had Greek affiliations. Here is just a small sampling of some famous Greek alumni and their respective sororities and fraternities.

The women of Alpha Chi Omega, one of the largest Greek women’s organizations in the United States, are real, strong women facing real issues in the real world. They are committed to creating a positive reality for themselves and others. The fraternity (not all women’s organizations are sororities) has more than 130 collegiate chapters nationwide and more than 200 alumnae chapters as well. The members of Alpha Chi Omega work to put an end to domestic violence by organizing awareness events, helping staff domestic violence hotlines and volunteering at local women’s shelters. Alpha Chi Omega counts Condoleezza Rice, Trista Rehn Sutter and Aubrey O’Day among its famous alumnae.

Courage, truth, faith and power define the value system of the Delta Tau Delta fraternity, a fraternity that has spread to over 200 college campuses since its founding in 1858. More than 150,000 men have become members, and today Delta Tau Delta is comprised of over 7,000 active undergraduate students. The fraternity chapters make a difference in their surrounding communities by supporting service programs such as Adopt-A-School and by raising money for the Bleed Purple Foundation. Before they were famous, actors Matthew McConaughey, Will Ferrell, James Mardsen and David Schwimmer joined Greek life as Delta Tau Delta brothers.

Kappa Kappa Gamma, another one of the oldest and largest Greek organizations in the United States, promotes a broad college experience for its members by emphasizing the importance of scholarship, cultural growth and philanthropy. It has 137 chapters, 307 alumnae associations, and has initiated 236,000 members since its founding in 1870. According to Kappa Kappa Gamma sisters, being a part of the group is like having a second family. The members work alongside the charity Reading is Fundamental, Inc. to help young people find joy in reading. Famous Kappa Kappa Gamma alumnae include actresses Sophia Bush and Ashley Judd, reality star Lo Bosworth, fashion designer Kate Spade and television show host Nancy O’Dell.

Personal growth, development and leadership skills are important to members of Sigma Alpha Epsilon, the largest social fraternity in the United States. Striving to be “true gentlemen,” more than 300,000 young men have been initiated since its founding in 1885, and today about 11,800 undergraduates are active members in its 241 chapters and 18 colonies. The fraternity has a zero-tolerance policy for hazing and risk-management violations, which has resulted in the suspension of a few of its chapters. As part of their philanthropic efforts, Sigma Alpha Epsilon brothers work with the Children’s Miracle Network to help save and improve children’s lives. Actor David Spade, singer Nick Lachey and Nobel Prize-winning author William Faulkner are among the notable alumni of Sigma Alpha Epsilon.

Greek life does not necessarily end after graduation. Active Alumni chapters throughout the country host a variety of programs and events that support the on-campus Greek communities. Celebrities even stay active and involved in Greek life after they leave school. Condoleezza Rice took time to pose for pictures with her Alpha Chi sisters when she spoke at college campuses. Matthew McConaughey represented his fraternity by wearing a Delta Tau Delta shirt at a red carpet event. Sophia Bush visited the USC Kappa Kappa Gamma house a few years after she graduated. The strong bonds of the Greek community make the members brothers and sisters for life and proud of their Greek affiliations.