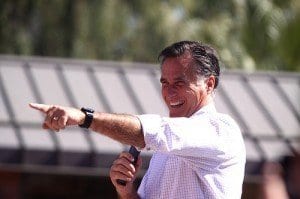 Witnesses to hazing incident led by Romney recall it as “senseless”

The Mitt Romney bully story is one that sheds a different light on the Mormon presidential candidate. The Mitt Romney bully story goes something like this; he didn’t like the look of the new kid because he had long dyed blond hair and decided to cut it off. His friends pinned the kid down and Romney cut off his hair. In an act that seems like an extreme form of hazing, it seems strange that Mitt Romney doesn’t remember being a bully.

In a Washington Post story, that chronicles the events of the Mitt Romney bully incident by first-hand accounts from Romney’s classmates that helped him do it: Matthew Friedman, Phillip Maxwell, Thomas Buford and David Seed. They all attended the prestigious Cranbrook School, which was known for its manicured fields and sharp looking students who were required to wear suits jackets and ties.

“It happened very quickly, and to this day it troubles me. What a senseless, stupid, idiotic thing to do,” said Buford, who was one of the ones to restrain John Lauber, the long-haired new kid. Friedman claims Lauber “was just easy pickin’s” when Romney first targeted him for his looks. Friedman recalls Romney saying, “He can’t look like that. That’s wrong. Just look at him!” Some reports say that Romney and his friends targeting Lauber because they thought he may have been gay.

Friedman felt guilty for not stopping the Mitt Romney bully incident, and when he ran into Lauber in the mid 90s at Chicago’s O’Hare airport, he finally got to apologize. He said, “I’m sorry that I didn’t do more to help in the situation.” Lauber responded, “It was horrible,” and a description of how frightened he was. “It’s soemthign I have thought about a lot since then.”

Romney has “apologized” for the incident; though, he claims that he doesn’t remember his role as a bully. He said, “Back in high school, I did some dumb things, and if anybody was hurt by that or offended, obviously I apologize for that. I participated in a lot of hijinks and pranks during high school, and some might have gone too far, and for that I apologize.”

According to the Washington Post, Romney laughed when he said, “I don’t remember that incident. I certainly don’t believe that I thought the fellow was homosexual. That was the farthest thing from our minds back in the 1960s, so that was not the case.”

Romney added, “I’m a very different person that I was in high school, of course, but I’m glad that I learned as much as I did during those high school year. I’m quite a different guy now. I’m married, have five sons, five daughters-in-law, and now 18 grandchildren.” Well, we certainly hope he didn’t have grandchildren in high school.

“There’s going to be some that want to talk about high school,” said Romney. “Well, if you really think that’s important, be my guest.”