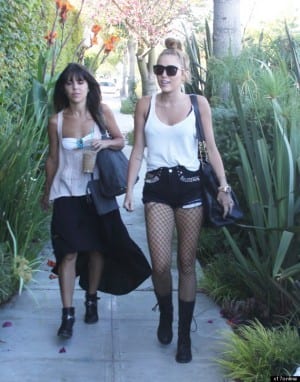 Miley Cyrus is just full of surprises lately! In a picture posted on her famous Twitter account last night, Miley Cyrus is now sporting a new, and much, much shorter ‘do!

The recently engaged Miley Cyrus took her Twitter followers on a ride August 12, posting pictures of her and celebrity hairstylist Chris McMillan getting ready for a drastic change in the star’s look. Cyrus started to tweet an unexplained countdown on August 8. The countdown’s destination was clear in a picture Cyrus tweeted of McMillan clasping her precious bun between shiny scissors.

A long way from the “Hannah Montana” blunt bangs and long strands, Miley Cyrus’s new look is anything but straight edge. Inspired by the sixties fashion icon Twiggy, Cyrus went for a platinum blonde and textured pixie cut. Cyrus is fighting off the haters of her new look as well, posting tweets that say she has never felt more “her” in her life.

Although the change was a shock to fans, Cyrus has wanted to look like the long-lashed Twiggy since her backstage interview with ABC News in 2008, according to the Los Angeles Times. “Twiggy, one day I’m gonna cut my hair like that,” she said.

Miley Cyrus isn’t new to surprising the masses, and she did so back in June of 2012 with news of her engagement to “Hunger Games” star Liam Hemsworth.

In addition to her new look and relationship status, Cyrus has also been rumored to have a “sexy” guest spot on the popular and slightly raunchy Two and a Half Men, according to E! Online. This is a very different Miley from her Disney Channel days.

What do you think of the new Miley Cyrus?