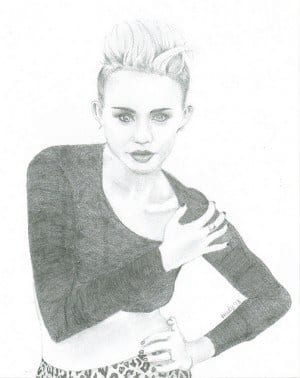 Miley Cyrus might be the newest mainstream punk rockstar. That’s the latest conclusion that bloggers and critics have begun to arrive at after the pop singer’s dramatic, confusing and, at times, surreal public personality change over the past several months. After months of mostly negative reactions to Cyrus’ various bizarre videos and performances, the formerly squeaky-clean Disney princess has finally scored some respect.

It isdifficult to pinpoint the beginning of Miley Cyrus’ transformation into her current raunchy, twerk-tastic, don’t-care-what-you-think persona, but she definitely foreshadowed the changes that were in full-force in the summer of 2013. In 2010, when Miley was fresh off of her Hannah Montana days, a video was leaked on YouTube that featured the pop star celebrating her 18th birthday by hitting a bong. Last fall, Miley Cyrus shocked and dismayed some of her fans by trading in her much loved, brown locks for an asymmetrical, short haircut inspired by Pink.

By April 2013, Cyrus had grown so comfortable with the budding stoner-girl that was seen in 2010’s leaked video that she was featured on a song with the reigning king of potheads Snoop Dogg, and with the June release of her single “We Can’t Stop” and its video, Cyrus’ new persona was solidified.

The video for “We Can’t Stop” is chock full of strange shots of fingers getting chopped off, money sandwiches, Miley Cyrus writhing in her underwear on a bed and plenty of haphazard twerking. Later in the summer, she reprised aspects of that video, drawing her most negative criticism for her VMA performance that became the most tweeted about event in history.

The most intense negative criticism came from writers concerned that Cyrus’ overtly sexual twerking with Robin Thicke was making a bad impression on her young female fans and that her use of heavy-set, female, African American back-up dancers was somehow racist.

After taking the brunt of all of this negative commentary, Miley Cyrus seems to have found a way to gain respect through the backdoor by ignoring the critics and doing what she wants. As Cyrus continues to release bizarre new videos, like “Wrecking Ball,” which features the singer crying in her underwear while French kissing a sledge hammer, more and more people write in praise of her new, rebellious attitude.

As Miley Cyrus twerked with midgets and sang into a banana-shaped microphone during her recent performance at the iHeartRadio music festival in Las Vegas, she showed no signs of apologizing or returning to her original good-girl personality. She can’t stop. She won’t stop.