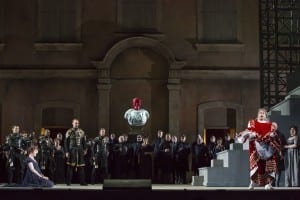 Mozart’s La Clemenza di Tito is a rarity at opera houses and has finally made it over to the Windy City as a part of Lyric Opera’s current season. Noted as Lyric’s “new-to-Chicago” production, La Clemenza di Tito, the opera was only previously performed in Chicago in 1989.  The opera is noted as Mozart’s only dramatic opera, where his others generally fit in the comedic category with their lighthearted themes.

La Clemenza di Tito delves into darker themes with death, tragedy, betrayal and unrequited love. Even though Mozart’s intentions for La Clemenza di Tito were more serious than his other works, his playful essence came through during many parts of the opera seria, garnering a series of laughs from the audience.

Although the stage was not minimalist, such as Lyric’s production of Madama Butterfly, it was not nearly as intricate as their production of Rusalka, which brought this production of the Mozart classic to an average medium of the two.  The set was still gorgeous, featuring a magnificent stone staircase and a classic medieval backdrop. Directed by Sir David McVicar, the performances were what really took this production to another level.

The conniving daughter of recent deposed Roman Emperor named Vitellia, was played by Soprano, Amanda Majeski, who blew audiences away with her vivid performance of a woman torn by guilt and power. Matthew Polenzani played off of Vitellia’s disloyalty as the pinnacle of devotion and honesty with his amazing performance as the current Roman Emperor, Tito.

The star of the night was clearly mezzo-soprano, Joyce DiDonato who took on a male role as Tito’s best friend, Sesto. DiDonato’s powerful arias grabbed the audience within the depths of the character’s emotions. Her flawless mannerisms made me forget that she was even a woman playing the challenging part.

Music Director, Andrew Davis, kept the orchestra flowing the entire time, with this classical score. The opera finale, lifted hearts with a touching sextet and chorus piece spearheaded by the talented Chorus Master, Michael Black. Lyric’s last show of the season was a perfect reflection of the undiluted talent that continues to penetrate the walls of the Lyric Opera of Chicago.