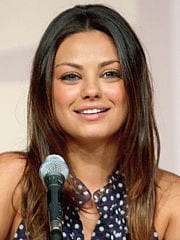 On Friday, Mila Kunis attended the Marine Corps Ball in Greenville, N.C., says the Washington Post.  Her presence fulfilled a promise she had made to Sgt. Scott Moore in July.

The “Black Swan” star hasn’t made a public statement about the evening, but spokesman Capt. Scott Sasser said, “It was a great experience for everybody.”

Moore had asked Kunis to the ball from his base in Afghanistan via a YouTube video, which has been viewed over four million times.

Justin Timberlake, who starred with Kunis in “Friends With Benefits”, and Kristen Cavallari were also in attendance.