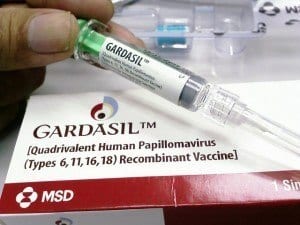 Getting the HPV vaccine doesn’t necessarily lead to sexual activity, despite the concerns of worried parents and abstinence-only sex education programs everywhere.

A study at Emory University in Atlanta found that teenage girls who received the HPV vaccine at age 11 or 12 didn’t engage in sexual activity any more so than their peers who did not receive the vaccine. The study could help dispel a widely held belief among parents that their daughters will be more likely to have sex if they get the vaccine, a belief that was revealed in previous surveys.

Some strains of HPV, or genital warts, can cause cervical cancer—a major concern, since it is also the most common sexually transmitted infection. At some point in their lives, about 50% of people contract the virus, which is why physicians and gynecologists have been recommending the vaccine to girls and women since 2006, when the shot Gardasil came out.

In the first 18 months that Gardasil was available, researchers at Emory gave the vaccine to about 500 girls age 11 or 12 and gave an unrelated adolescent vaccine to another 900 girls of the same age. They followed the girls for the next three years and tracked how many exhibited outward signs of sexual activity, such as contraception counseling, STI diagnoses or pregnancy.

The results? Only 10% of the participants showed signs of sexytime, and there was no significant difference between the vaccinated and unvaccinated girls. Whether this study will increase the number of girls who get the HPV vaccine remains to be seen; as of 2010, not even half of eligible girls got the Gardasil shot. Cost and inconvenience, though, are likely factors in addition to parental concerns.