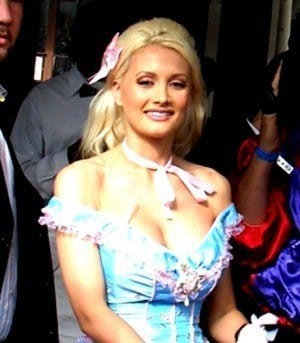 Holly Madison may not live with Hugh Hefner anymore, but that doesn’t mean she’s going to let her breast assets go to waste.

The Hollywood Gossip reports that Madison has taken out a $1 million insurance policy on her breasts. Madison, whose latest venture is a Vegas production called “Peepshow,” said she’d rather be safe than sorry.

“I’ve heard about people getting body parts insured and I thought, ‘why not?’ because if anything happened to my boobs, I’d be out for a few months and I’d probably be out a million dollars. I thought I’d cover my assets,” Madison told People.

Of course, Madison is not the only celebrity to insure body parts with Lloyd’s of London. Dolly Parton has also insured her breasts and classic comedian Jimmy Durante insured his legendary schnozzola.