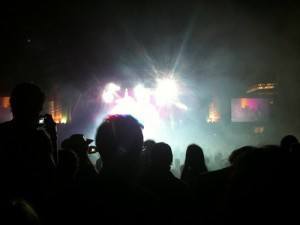 A horrifying incident at the Billboard Music Awards put singer Miguel in a hard spot after he attempted to jump from the stage to the catwalk and instead landed on a fan’s head. At first she seemed okay, but now the victim, Khyati Shah, may actually have brain damage.

Following the nasty jump, the girl was given an ice pack for her head. Looking back, Shah’s lawyer says that the Billboard Music Awards should have rushed her to the hospital.

“Some of the difficulties she’s experiencing are cognitive in nature and lead to suspicion of a neurological head injury,” said Shah’s lawyer, Vip Bhola, to TMZ.

Instead of being rushed to the hospital, and being faced with possible neurological damage, Shah was kept after the show to meet Miguel, where he seemed apologetic.

“The crazy thing is, when you’re performing and you’re just kind of into it, you never know where it’s gonna go and where you’re gonna go with it, and how that might turn out,” he said to Billboard.com. “So this is one of the less favorable moments.”

We’ll all be keeping Khyati in our thoughts as she waits for the results to the neurologist. And hopefully actions will be taken to assure that such a traumatic situation will never happen again. No fan should have to worry about being hit in the head while enjoying music at a concert.