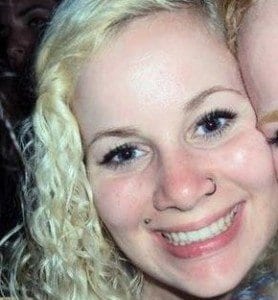 The search continues for the missing Louisiana college student

Michaela “Mickey” Shunick, a University of Louisiana student, has been missing since Saturday.

Police in Louisiana are now searching for 22-year-old Mickey Shunick. She was last seen riding a bicycle around 2:00 a.m. in Lafayette, Louisiana, after leaving a friend’s house. The FBI and the Louisiana State Poliec have joined the search, and volunteers are scouring the area where Mickey Shunick was last seen.

Friends of Mickey Shunick and other searchers set out today to follow the route they believe the missing girl took in the early hours of Saturday morning.

“I asked her to be safe… I saw her to the driveway and that was the last time I saw her,” Brettly Wilson said. Wilson was the last known person to see Mickey Shunick prior to her disappearance.

Friends say Mickey Shunick was not drinking, and her family can’t think of any reason anybody would want to harm her.

Mickey Shunick’s family said they knew something was wrong when she didn’t attend her brother’s graduation ceremony Saturday morning.

The Shunick family said Mickey Shunick is an avid cyclist, and it was not unusual for her to be riding a bicycle at that late hour. They also said their daughter would never disappear like this.

Mickey Shunick reportedly carries a can of mace with her when she rides.

Friends and family have been posting fliers all week and have been looking for clues along the route they believe she traveled. Had Mickey Shunick not disappeared, they would have been celebrating her 22nd birthday Monday instead. Her family hopes to be able to have something to celebrate soon.

“I think she’s ok, I think she’s alive. I think she’s out there,” Mickey’s sister Charlene told ABC affiliate KATC-TV. “She’s my mini-me. She’s one of my best friends and I just miss her and I want to know what’s going on.”

Friends and family held a candle light vigil Tuesday night, and announced a $20,000 reward for tips leading to her whereabouts.

So far, no hints have turned up despite efforts by law enforcement—including K-9 units—and the thousands of volunteers. Law enforcement continues to recover security video footage from dozens of businesses that could have caught anything on tape, and the Shunick family remains hopeful that Mickey will return home soon.