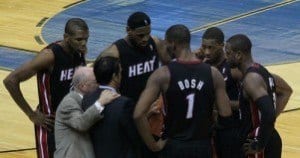 When the Miami Heat came into Chicago on Wednesday night, they were just six games away from tying the record for most consecutive wins in the history of the major North American sports leagues.

When they left Chicago, though, they were back to square one.

The Miami Heat’s 27-game winning streak was halted by the Chicago Bulls Wednesday night, as the home team outlasted a third quarter comeback to prevail by a score of 101-97.

The Miami Heat hadn’t lost since Feb.1, the weekend of Super Bowl Sunday. But the Bulls were able to beat the hottest team in the league by exploiting their biggest weakness: lack of size.

The Bulls manhandled the Heat inside, as the team grabbed 12 offensive rebounds and out-rebounded the Heat by a margin of 43-31.

Carlos Boozer led the way for the Bulls with 21 points and 17 rebounds while Luol Deng scored 28 and second-year wingman Jimmy Butler chipped in 17.

For the Heat struggled as a whole offensively but the Big Three played well; Lebron James, Chris Bosh and Dwayne Wade scored 32, 21 and 18 points respectively.

Both teams were active defensively and very physical; the game saw 15 blocks and 20 steals combined, as well as a half-dozen hard fouls that left players grimacing on the ground.

The Bulls’ transition defense thrived as several Heat fastbreaks were stopped in their tracks by blocks or hard fouls. Strangely, the Bulls scored more transition points than the Heat by a margin of 15-11.

The Bulls got off to an early lead and held on to that lead for the entire first half. The Bulls started the second half up 55-46, but the Heat’s stifling defense made scoring miserable for the Bulls, and the closing minutes of the third quarter saw the Heat take a one-point lead on a three-pointer from Shane Battier.

But the Bulls found their offense in the fourth quarter, led by a smattering of three’s from Luol Deng. And in the end, they held on to win the game and stop the Heat’s historic streak.

After the loss, Miami coach Erik Spoelstra mentioned the streak to the team for the first time. The team took a minute to reflect on the accomplishment, and then shifted focus to the next game. But finally, the team had a moment to appreciate what they had just accomplished.

“We haven’t had a chance to really have a moment to know what we just did,” James said. “We had a moment, just very fortunate, very humbling and blessed to be part of this team and be part of a streak like that.”

[easy-social-share buttons="facebook,twitter,google,linkedin,stumbleupon,pinterest" counters=0 hide_names="force" fixedwidth="yes" fixedwidth_px="111"]
Previous ArticleElena Delle Donne helps the Blue Hens to the Sweet 16Next ArticleRed equal sign goes viral on Facebook, but what does it mean?