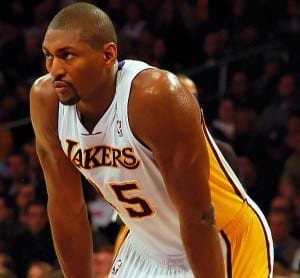 Artest ejected from game after elbowing player in head

Metta World Peace has reverted to his bad boy ways, it seems. While cheering his own shot in the second quarter of the Los Angles Lakers-Oklahoma City Thunder game, he delivered an elbow to the back of Oklahoma City guard James Harden’s head, knocking him to the floor.

Harden was diagnosed with a concussion and did not return to the game. Metta World Peace, born Ron Artest, was ejected form the game and faces possible suspension for the remainder of the regular season and possibly into the playoffs.

The forward has a history of bad behavior, most notably when he ran into the stands of The Palace at auburn Hills and incited a brawl in 2004. After the brawl Metta World Peace was issued a year-long ban from the NBA. The longest suspension for on-court behavior in NBA history, his suspension totaled 86 games. His re-instatement came with an implicit zero-tolerance clause for bad behavior. Overall, he has received over 100 games in suspension, including a seven-game suspension in 2010 that resulted from a domestic violence dispute.

In 2011 the player seemingly turned over a new leaf and legally changed his name to Metta World Peace, in an act that “was meant to inspire and bring youth together all around the world.” He chose the first name Metta because it is a traditional Bhuddist word that means loving kindness and friendliness towards all.

As for this latest incident that definitely does not qualify as “loving kindness and friendliness,” Metta World Peace is claiming it was an accident. “I got real emotional and excited, and it was unfortunate that James had to get hit with the unintentional elbow,” he said after the Lakers’ win. “I hope he’s OK. Oklahoma, they’re playing for a championship this year. I apologize to the Thunder and James Harden. It was just unfortunate.”

The Lakers won 114-106 over Thunder in double overtime.

[easy-social-share buttons="facebook,twitter,google,linkedin,stumbleupon,pinterest" counters=0 hide_names="force" fixedwidth="yes" fixedwidth_px="111"]
Previous ArticleJohn Edwards set to go to trial todayNext ArticleKevin Love will not be seen back on the court this season