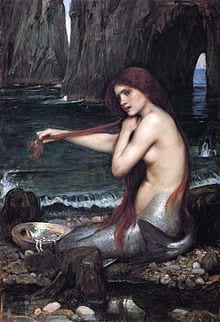 Some people aren’t giving up hope that mermaids are real

Speculation is still stirring as to whether mermaids are real following an Animal Planet documentary titled Mermaids: The Body Found in which, you guessed it, a mermaid body is found. Animal Planet, typically known for their factual documentaries, aired the specified science fiction documentary about finding a mermaid body back in May and ran a repeat of it again earlier this week.

The documentary caused confusion in viewers as to the reality of mermaids. Using techonology and faux-documentary filming style akin to The Blair Witch Project , the program follows a scientific team investigating what appears to be a mermaid body found on the shore and their investigations to find out if mermaids really exist.

Despite the show clarifying that it was just fiction, viewers were so convinced the mermaid body was real that the National Oceanic and Atmospheric Administration was prompted to release a statement stating that mermaids don’t exist.

“The belief in mermaids may have arisen at the very dawn of our species,” the NOAA statement said. “But are mermaids real? No evidence of aquatic humanoids has ever been found. Why, then, do they occupy the collective unconscious of nearly all seafaring peoples? That’s a question best left to historians, philosophers, and anthropologists. “

Still, Animal Planet is not giving up their claims that the mermaid body found could be, at least in part, true.

“What if there’s a kernel of truth behind the legend of this mythic creature?” a program description reads. “Is the idea of mermaids really so far-fetched? Maybe so, maybe not. The show itself, though science fiction, is based on some real events and scientific theory.”

Click here to view a video preview of the Animal Planet documentary about the mermaid body.