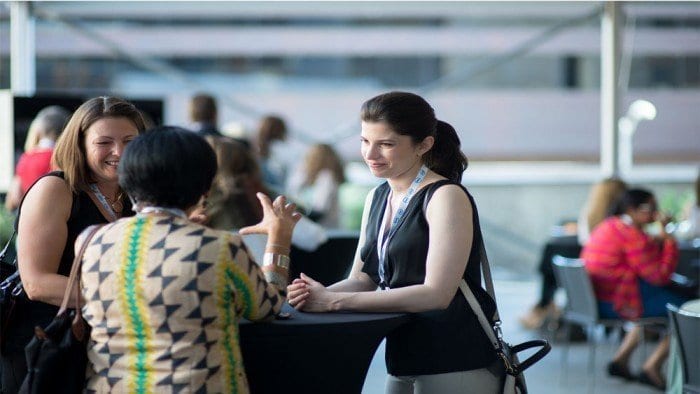 Like many students, Matt Bojanic is introducing himself to campus alumni, collecting business cards and sending out his resumes.

The UCLA student is networking, the act of meeting and forming relationships with people in your field to gain an advantage in the job market. Last year, he attended an entertainment networking night sponsored by the campus’ student alumni association. He talked to panelists in the industry, exchanging contact information and asking them for tips on interviewing.

In the current economy, jobs are becoming harder than ever to come by for college graduates. Which makes networking all the more important.

“Success revolves around building the who-you-know network, because the job market has and always will be about who you know,” said Michael “Dr. Woody” Woodward, PhD, executive coach and author of The You Plan.

According to the Wall Street Journal, one in ten jobs come from a personal referral, whereas one in 219 comes from a job board, like Monster.com.

Woodward advised students to target their network based on the field or business they want to explore. Students should then get to know them by attending professional associations, community events and local chapters of a professional group.

Social media has also enabled students to make more connections than ever, with websites like LinkedIn and career networking apps on Facebook. Woodward recommends students use social media to whittle down to the key players and form targeted relationships. He also said students need to book “face time,” this is, picking up the phone to arrange a local meet up with the people their network. From there, members of their network will get to know the student personally and give them a better understanding of their job.

After finding their network, students should find an internship to test drive their career and develop an inside track, he said. Furthermore, many companies hire their interns and use the internship as an audition. Students will also be able to form a connection with the employer or colleagues, who can then link the student up with a job, he added.

Woodward said that students should not expect their network to do the work for them. Tell them what you’re interested in and know the questions you ask and what you want to get out of it, he said. He advises students to think of networking as a long term strategy, where a relationship can be beneficial down the road. With many workers in the company network getting laid off, it’s better to keep the network in the loop and update them with short and simple messages. An email once every three months could be reasonable. For instance, an aspiring writer can send their network links to the work they’ve done and ask for input on an article. One can even put up a schedule on when to keep in touch with the network and go through old emails to see who they may want to contact.

Once students meet up with a member of their network, they have to know their brand package and deliver that in a simple yet impactful sound bite, Woodward said. The three key elements are credibility, value and what makes the person stand out. For instance, someone can say what school they’re attending and what honor programs they’re in to establish legitimacy. To show value, they should research what their network is looking for and tell them how their past work relates to it. And third, they say something about themselves that separate them from most people.

It is never too late to start networking, said Katharine Hansen, associate publisher and creative director at Quintessential Careers.

Her favorite technique is informational interviewing, where students “interview” a professional about their job.

She said these interviews provide a way to develop a deeper personal connection with someone inside an organization and give them inside information that can later be used in the job search. Some of those interviews can also lead to contacts, jobs, or internship offers.

Hansen added there’s a misconception that networking is about “using people.” But people enjoy giving advice to people. And there are also plenty of people that students can network with, such as peer students, parents, parents of friends, professors, advisers and coaches.

For Bojanic, his connections with UCLA’s Alumni Association came in handy when an alumnus offered him an interview for a marketing internship for traveling stage shows.

Although he felt intimidated by networking at first, Bojanic said that ultimately the panelists at networking events want to talk to students and help them find jobs.

“The worst they can say is they’re busy, and rarely are you going to find someone who is rude,” he said.

Previous ArticleiOS update for Apple usersNext Article#FF: The funniest people you're not following on Twitter