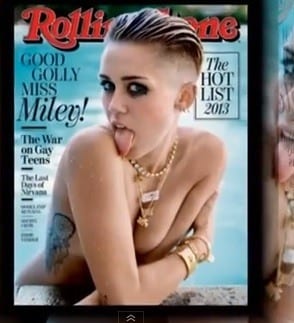 Miley Cyrus has blown up the airwaves recently starting with her much referenced “twerking” at the VMA’s. She followed that up by breaking up with her longtime boyfriend, actor Liam Hemsworth. Now, Miley graces the most recent issue of Rolling Stone magazine wearing nothing at all.

On the cover, Miley is completely nude, only sporting her signature platinum blonde updo and her tongue hanging from her mouth. The 20-year-old star has moved from one outrageous moment to the next.

Millions of viewers have witnessed her twerking and her nude music video for her single “Wrecking Ball.” Miley, however, states that she isn’t who people think she is.

In her Rolling Stone interview, Miley admits that “I think it’s an important time not to Google myself. It’s like, ‘Miley thinks she’s a black girl, but she’s got the flattest ass ever. I’m like, ‘I’m 108 pounds! I know!’ Now people expect me to come out and twerk with my tongue out all the time. I’ll probably never do that shit again.”

It seems that Miley Cyrus is very aware of the backlash against her after her provocative gestures in public; ie., foam finger, latex bikinis, tattoos, nudity, etc.

Though Miley’s star continues to rise, so does the increasing scrutiny surrounding her. Parent groups, critics and celebrities alike have come out against her antics. Though she acknowledges the embarrassment related to her public persona, it is unclear whether she shall change her ways soon.

For those just interested in seeing Miley Cyrus nude, check out the newest issue of Rolling Stone.