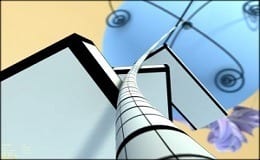 The neverending “Are games art?” debate has just been silenced

The Van Abbe Museum is home to the contemporary works of Pablo Picasso and El Lissitzky among many other internationally renowned artists past and present. Currently, the museum is even featuring a little indie racing game called “Proun.”

“Proun” is the creation of Joost van Dongen, a Dutch indie game designer who also was responsible for a colorful painting adventure called “de Blob” which THQ later purchased the rights to. “Proun” has been kicking around for six years, a product of spare time and inspired evenings, and it’s a racing game that not only dazzles the eyes, but has a unique hook built into it.

It isn’t a typical racing game in the sense that there doesn’t seem to be any competition (and perhaps its spiritual cousin is “Audiosurf”). Rather, you maneuver up and down on a cable that runs through abstract landscapes, trying to avoid the obstacles appearing in the distance. Given the game’s dazzling good looks, this simple task may be more daunting than you think.

In a recent press release, van Dongen commented on his achievement:

“With Proun I tried to make something that looks radically different from most other games, and so far reactions have been very positive. I am both happy and surprised that following my own stubborn vision worked out so well!”

His artistic racer will grace PCs in the spring of 2011, but in the meantime it will also be on display at the La Gaîté Lyrique museum in Paris. That makes two influential museums which consider “Proun” a work of art. One could argue that this effectively silences the “games as art” debate which Roger Ebert ignited last year.